This Article Was Written By Gary C. Clement of G-Tube Network Media 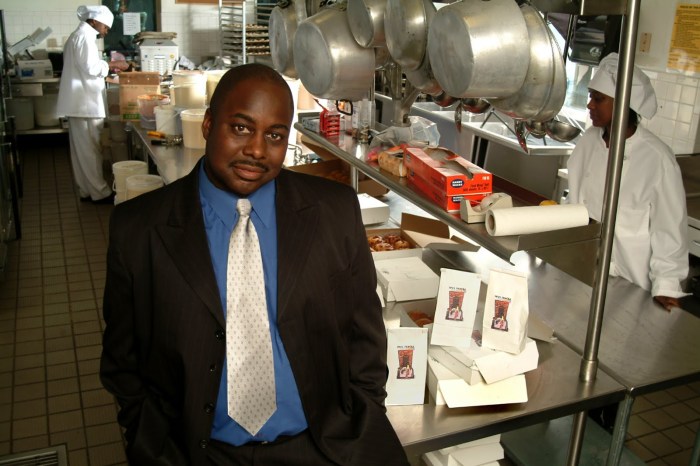 If you’ve ever been to the World Famous Apollo Theater in Harlem, New York, on show nights, it’s straight lights, camera, action and the who’s who of the music and entertainment industry could be standing just a few footsteps away. Ralph Rolle, the Show Time At The Apollo Veteran Drummer and businessman has gotten use to all the star-studded hoopla after 18 years of playing with the best in a line up that has included hundreds of performers, established and new comers. He’s also no stranger to making cookies, and watching how the tasty treats bring a smile to everyone’s face lucky enough to eat one. Yea that’s right- a drummer who bakes cookies? Wow, now that’s original and for sure worthy of a day in the spotlight. Rolle is the proud owner of The Soul Snacks Cookie Company, a sweeter secret than he and his family ever imagined. To celebrate the return of the company, Rolle is working harder than ever to balance a career in music while becoming a king in the snack industry.

“This is a recipe that came from many generations of my family, “ explains Rolle. “Baking cookies is just something that I was taught since I was kid growing up”. The Soul Snacks Cookie Company was founded in 1996, while Ralph was living in an apartment. Today the company is housed in a bakery in Long Island City, New York. “Yea this was something that I had my former girlfriend to help me with, “ as he continues. “ We were baking cookies out of the house and people loved them. I actually had a music studio in the house and all the different musicians and singers that came by, we didn’t go all out and get expensive foods or any of that, we just gave them cookies. So people were like ‘ you need to sell them cookies’, and finally we put our heads together and took a shot at it”. What resulted was people throughout the surrounding areas began asking for the tasty treats and Rolle was in business. The business lasted, but the then relationship failed. The cookie flavors cover a variety including the Down Home Double Chocolate Chip, the Georgia Oatmeal Raisin, the Miami Raisin Nut, the Chunked Up Chocolate Walnut, the Peanut Peanut Butter cookie, the Grampy’s Chocolate Peanut Butter Cookie, and the recently added Sweet Potato Cookie. Cookie tins are $12.50 each, or you can purchase a gift box, which includes an assortment of cookies for $65.00.

Beyond his passion to bake cookies, Rolle is a gifted and inspiring musician who has traveled the world, working with a variety of artist, including Biggie Smalls, Queen Latifah, Erykah Badu, D’Angelo, India Arie, Roberta Flack, and is the drummer for Showtime At The Apollo along with Ray Chew and The Crew. “ I started playing drums in 1978 after experience from the Drum and Bugle Corp, “continues Rolle. “This group was everything for me. I learned so much and it gave me so much exposure to all kinds of people and techniques. My first professional job was when I turned 19 years old. I was on the road and I played with anyone that would give me a paycheck. Back in those days playing the clubs and bars was totally different, and after playing all night you might have $100.00. So in doing the roadwork, I landed the job of A&R for Jive Records. One of my major accounts at the time was that of the group High Five, which really gave me an opportunity to gain exposure and experience. The next project was Robert Kelly (R. Kelly), I had a hand in working with him as well.”

Rolle has been a musician for 33 years, where he got his start in music as a member of the Drum and Bugle Corp. He remembers how at age 9 he would visit The Apollo Theater for the first time. “When I was young my mother would only allow my sister to go to the Apollo if she would take me with her. So for me this was great because I will never forget one of the shows we went to, which had on the marquee, The Jackson 5, and I thought to myself, why do they have a Gospel Group as the headliners? We went inside and I saw this little small kid named Michael Jackson, singing, tearing the Apollo up. I was hooked, and I’ve been going ever since. For me, The Apollo is like our very own Smithsonian Institute, with all the lights and everything. It was very fascinating and exciting for me. The way I got the gig as drummer for The Apollo, was that the lead drummer at the time, Buddy Williams, was real busy, and he asked if I would sub for him. The Executive Producer of the show and Ray Chew got together and decided they liked what I was doing and I worked well with the other musicians and they hired me on full time”. But the magic is in what Rolle would love to do for today’s generation, “ My other passion is working with our youth, “ as he continues. “ Something that I have not done and wish to establish is something like the Drum and Bugle Corp, similar to what I had growing up. With all the music programs being cut in the schools, and money for the arts slowly being cut everywhere, I feel that young people would really benefit from such a venture. So to establish a funding source for kids to get instruments would be a program I could see investing in for the future”.

Searching for that perfect solution to merge entertainment and baking, Rolle depends on family to make all of his operations run smoothly. His nephew is owner and operator of Jaia Distributing, which is responsible for delivering his Soul Snack Cookies throughout the city and other areas, while his sister handles the day-to-day business administration duties. In building his brand, he utilizes the skills and talents of PR guru Angelo Ellerbe and Double Exposure Public Relations. Just a few of the celebrities who have enjoyed Rolle’s tasty snacks include Singer Gladys Knight, Academy Award Winners’ Whoppi Goldberg and Monique, Actor Chris Rock, TV personality Lou Dobbs, Actress/Singer Jennifer Lopez, Actor Steve Harvey, Singer Roberta Flack, Singer D’Angelo, DJ Kid Capri, Rapper Doggie Fresh and others. “We’re one big family, “ says Rolle. “ I’m so busy and I can’t do it all so I have other people who help me make it all happen. But with technology today, I might be out of the country, but with the Blackberry, and computers, I can still do what I do even though I’m not there. The way I see it there are no excuses any more. We have the tools; you just have to be willing to put in the time. Sometimes sleep is a commodity in my life. I have started a many businesses sitting on the phone and on the computer at the same time. So it can be done, we just have to be willing to put in the time to make it work.”

For the future, look for Rolle as he continues his gig at Showtime At The Apollo. In closing he says, “ Live with passion. I don’t want a single day to go by that I didn’t do something good in the world”. Upcoming events for Ralph Rolle include touring with Recording Artist Nile Rodgers and Chic in China and Japan. He’s also in the process of completing some voice over work and recently created an online social networking company entitled http://www.imgiggin.com/. His company, Rolle Entertainment is currently developing and working with singer Danielle Ashley and Singer/Counselor Dr. Eric Turner. The Soul Snack Cookie Brand (888-SOUL-NYC) or (http://www.soulsnacksnyc.com/Soul_Snacks/Home.html) is soon to be available nationwide via The Chef’s Warehouse Distributing Company.