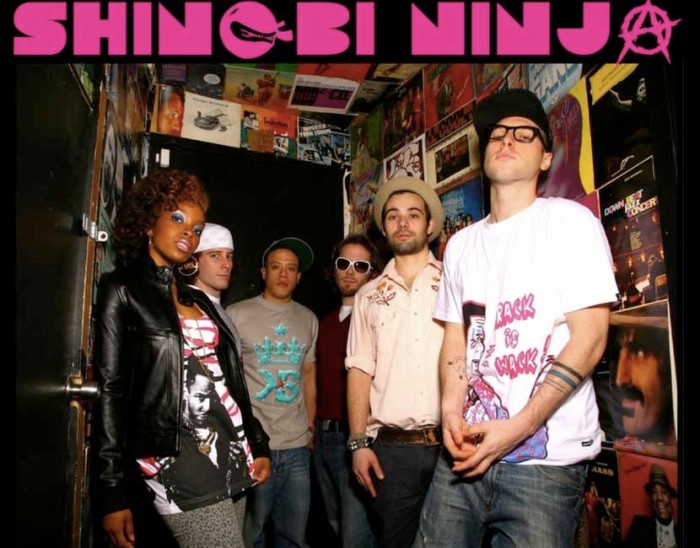 SHINOBI NINJA are the super group for the 21st century, composed of six colorful, vibrant New York City musicians and performers from different corners of the music world. “To put it simply, they are a walking, breathing and screaming cartoon: loud, colorful and full of enough energy to put nearly any other band to shame,” says New York’s Radio Exile. With their debut EP Brooklyn to Babylon and their own revolutionary video game Shinobi Ninja Attacks, the band is ready to bring the party to you, wherever you are! Onstage and online, Shinobi Ninja have built themselves a devoted following, garnering much-deserved attention from notable sources such as Mergent Music Magazine, who proclaimed the band were “taking over the world, one sweaty rock circus at a time.”

That conquest begins now with Brooklyn to Babylon, a high-energy collection of eight party-starting tracks that have already been concert-tested for maximum enjoyment. The band will take their breakthrough to a wider audience one step further with the release of their own video game app, Shinobi Ninja Attacks. Designed for the iPhone, users are invited to play as their favorite member of the band, journeying through a cartoon New York while select Shinobi tracks play in the background. “These days, a lot of people are more into interactive multimedia experiences than just listening to music,” says drummer Terminator Dave. “So, we found a way to get our music out to people and get them to interact with the band in an exciting new way.” So far, the band has accomplished everything by staying true to their DIY work ethic. They’ve produced their own records. They’ve booked and promoted their own shows. And, like many of today’s up-and-coming groups, they’ve built a formidable web presence using social media platforms such as Twitter, MySpace and Facebook. “Up to this point, we’ve insisted on doing it all ourselves, all the way,” says Shinobi Ninja drummer Terminator Dave. This year they appeared on Fox 5’s FEARLESS MUSIC program, delivering unstoppable versions of “Brooklyn to Babylon” and “Nah Nah” live on-air. They’ve also built a reputation as one of New York’s most inspiring, dazzling live acts, winning over crowds at the CMJ and Afro Punk festivals.

It all started at Progressive Studios, a Hell’s Kitchen haven for local musicians, where lead singer DA and bassist Adriano Morez were working as producers and engineers. Across town, Terminator Dave and his twin brother, guitarist Maniac Mike were working with local turntablist DJ Axis in their band Wax Machine while refining their own production skills at their home studio. The two groups came together for the first time when Maniac Mike showed at Progressive to lay down guitar parts for a session. The final ingredient was Baby Girl, a regular at Progressive herself taking vocal lessons from Sugarhill Gang’s Craig Derry and checking in for solo sessions with DA. Mike and Dave discovered her incredible talent onstage during her appearance at SXSW 2008. “She was performing with Santigold at the festival,” remembers Dave, “Mike and I were completely blown away at what an amazing singer and dancer she was. We were bragging to everybody, ‘That’s our friend up there!’” Looking back on her introduction into the fold, Baby Girl recalls being equally impressed with her new band mates’ skills. “I knew DA was an amazing producer and singer, but I had no idea the rest of the band were so good at what they do,” she says. “Once I found out, I said, ‘Y’all are dope, let’s do this.”

It wasn’t long before the musicians were partying together and fleshing out ideas for new music, sometimes crafting complete songs in a matter of hours. The tracks merged influences as diverse as Nirvana, Janet Jackson, Faith No More, Poison, Sublime, Metallica, Beastie Boys, and 311. “A lot of our sound comes from partying, it’s party music,” says Baby Girl. “But at the same time, it’s eclectic – it can appeal to all different audiences, and I think that’s the way it should be.” With this unbeatable group dynamic also came their unbeatable name. “The studio where we first recorded these tracks was my mom’s house,” says Dave, “which everybody thought looked like a ‘ninja house.’” DA, for one, was transported back to his childhood pastime of playing the classic Sega game Shinobi. The band had briefly considered naming themselves after one of their first tunes, “Brooklyn to Babylon,” but, as Dave says, “as soon as we told everybody we were Shinobi Ninja, they said, ‘That’s the f***ing best name I’ve ever heard!’” It stuck.

Their boundless energy and creativity has resulted in the band’s smashing debut EP, Brooklyn to Babylon, with tracks such as “Rock Hood.” The song was originally a solo track from DA, inspired by the King of Pop: “I was thinking of Michael Jackson’s “Dirty Diana,’” he says, “and I just tried to write a song that was as good as that.” The resulting track is a funk-rock workout, embellished by scratches courtesy of DJ Axis, with an out-with-the-old, in-with-the-new attitude: “I could keep on talking but they just don’t get it/They wonder why I listen to the music I do/They’re old school so they really don’t know,” sings DA, half-crooning, half-rapping. “Brooklyn to Babylon” was also a formative moment for the band, which found the members working in an all-night session to assemble the bulk of this party-line call-to-arms – featuring nods to grunge, rap and reggae within the song’s first 30 seconds – in just one recording session. The instantly memorable chorus that begins the song can be seen as a playful statement of purpose for the band itself: “Daps to my homies mad love to my chicks/Hip-hop the Rock, I gotta get that fix.” Another standout is the Baby Girl showcase “Nah Nah,” again, a song written in a lightning-speed burst of inspiration between DA and the Baby Girl. “He encouraged me to make that beat myself,” says Baby Girl. “I didn’t think it was anything, but the rest of the band latched onto it and rocked it.” The song is a sassy shuffle, featuring Baby Girl’s seductive raps and the insistent, teasing refrain: “Nah Nah/You can’t get it/You can’t have it/You can’t grab it.”

“’Extra’ is our motto,” says Dave. “When we play, Mike will be head banging while he’s finger tapping on his guitar, and Adriano will be jumping off a six-foot amplifier right in front of the microphone to sing. We live for this, and we love what we do – and you can tell when you watch us play.” With their must-see live gigs, their party-in-a-box debut EP and interactive video game, Shinobi Ninja are always going the extra mile to make you part of the excitement. And you’ll find the band’s irresistible funky rock hooks, energetic performance style and fun loving attitude will make you want to join the revolution.

For More Info About Shinobi Ninja Please visit their website or email them (ContactShinobiNinja@gmail.com)!